Thugs Of Hindostan releases on November 8.

After unveiling the first song Vashmalle featuring Amitabh Bachchan and Aamir Khan, the makers of Thugs Of Hindostan have now dropped the teaser of the second song which is titled Suraiyya. Goes without saying, Katrina Kaif is the centre of attraction, as she plays the role of Suraiyya in the film. The actress looks drop dead gorgeous in the teaser and we want the full song to be out ASAP! However, her dance moves leave us disappointed, as they are more crazy than sensuous. Kat made everyone whistle out loud with her scintillating moves in Chikni Chameli and Sheela Ki Jawaani, but we wonder if she would be able to do the same with this number or not. Well, we are not judging the book by its cover and hence are waiting for the complete song to be out.

Meanwhile, check out the teaser of Suraiyya right here: 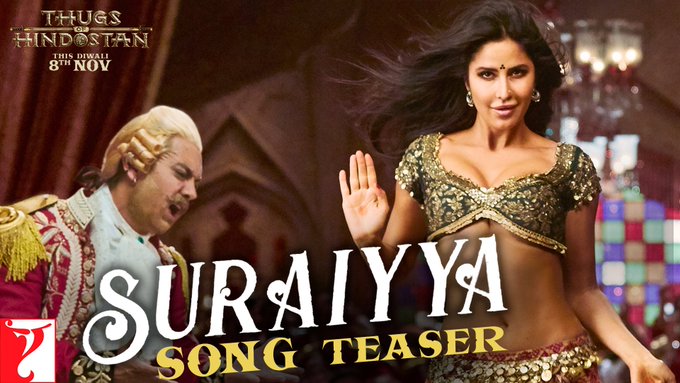 Suraiyya jaan lene to aa rahi hai, but we are not sure if she would kill us with her moves or not. Anyway, talking about the song, it is crooned by Vishal Dadlani and Shreya Ghosal. It has been composed by Ajay-Atul and the lyrics of the song are penned by Amitabh Bhattacharya. Backed by Yash Raj Films and directed by Vijay Krishna Acharya, Thugs Of Hindostan, is scheduled to release on November 8.